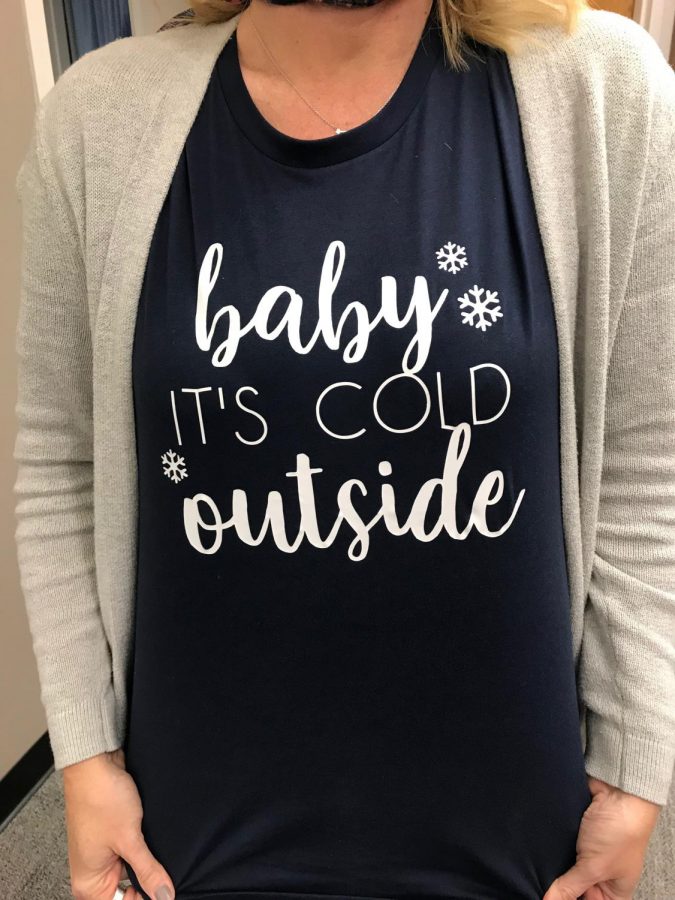 Mrs.Pyle’s Shirt showing how much the song means to many during the holidays.

With Christmas just around the corner, everyone is listening to holiday music and putting up their tree. Many people look forward to hearing all their favorite songs on the radio during the holiday season. But have we overlooked certain messages they may have portrayed throughout the years?

Recently many radio stations around the US have banned the song “Baby, It’s Cold Outside” from their stations all together. This song has been a controversial topic for the past several years, with some of the lyrics being sexist and suggesting rape in today’s world. “Say what’s in this drink? (no cabs to be had out there) … Ah, you’re very pushy you know? I like to think of it as opportunistic.”

The popular radio station KOSI Denver, had received many complaints about the song and some said it was sending a wrong message about consent. The song was removed from KOSI however, there was an unexpected backlash from people who enjoyed hearing the song every Christmas. A poll was made on their website to see if it should be returned, and the vast majority wanted it back on their daily playlist. The song will return to KOSI Denver, but it is uncertain if it will return to KOIT San Francisco and other radio channels.

Pro: Song is not sexist

Speaking to Alexa Allen, Freshman, she said, “I think it is supposed to be a friendly song. It sounds like he’s kind of forcing her to stay in the house, but I still think it is a good song to play around the holidays.”

Personally I don’t think the song is sexist or suggesting rape, at that time I don’t think the song was meant to put across that message. This song describes a woman that stops by her boyfriends house on a cold winter night. They talk back and forth about how long she is going to stay, she stays longer than expected, and then implies she will sleep over. In this song, many are making it out to sound like he is keeping her there, when there are many indications that she wants to stay. She never says she wants to leave, rather that other people would not want her to be there. This song simply feels like a cute song to play during the holidays about two people that are in love. Overall, I consider this song one of the original Christmas hits and it definitely won’t be taken off of my playlist.

The song Baby it’s Cold Outside has sparked controversy among Christmas music listeners, due to the sexist and pressuring lyrics. A few radio stations have removed the song from their playlist, resulting in backlash from the audience. Several times throughout the song, the woman gives reasons as to why she can’t stay the night with the man she is with. She blatantly says “no,” along with other phrases that show lack of interest, but is responded to with pressuring excuses as to why she should. In the end, she reluctantly gives in through force.

Baby it’s Cold Outside should be removed from Christmas playlists. Especially in this era, where sexual harassment is being openly spoken about and criticized, women should feel encouraged to be independent and confident. This song is degrading and humiliating as a woman, and it should be for men too. Being played on the radio can also be triggering to anyone who has experienced harassment. People who enjoy the song can listen to it on their own time, but being publically played should be restricted, because the lyrics are (obviously) quite controversial.

Many opposers of the ban believe that the song’s connotation is simply due to the time it was released- the mid 1940s- and should have no negative stigma because the lyrics are reflective of the time period. However, the story still revolves around the woman’s desire to leave while the man pressures her into thinking otherwise. The classic song is a negative influence, and can give the wrong message to children who listen. No means no.