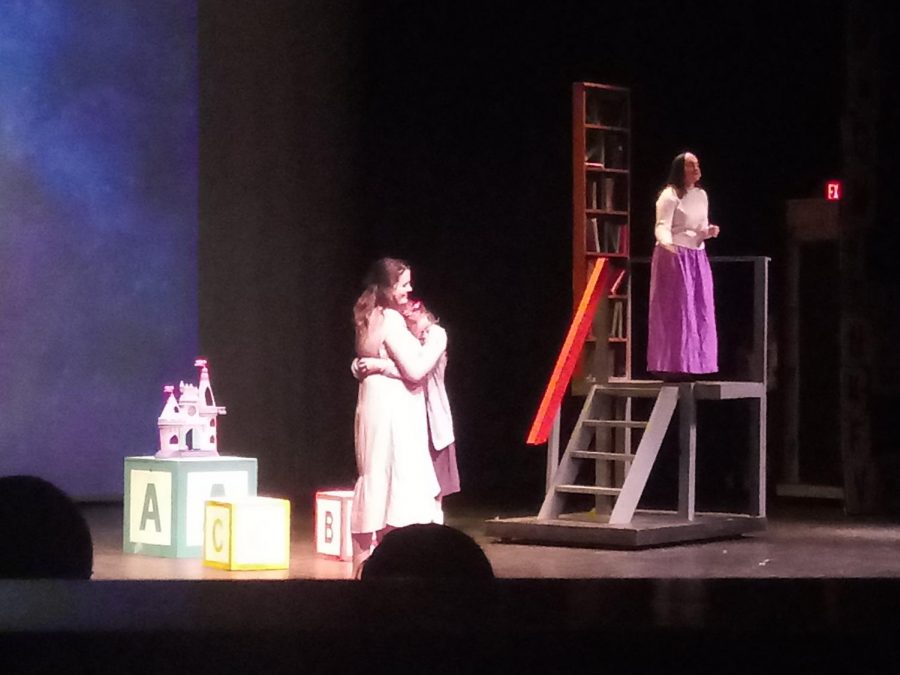 Lily Parker, Josie Strathman, and Tessa Boesker in ‘Matilda: The Musical’ as the show comes to a close.

Everyone knows the story of sweet Matilda, and her horrible family and headmistress, Miss Agatha Trunchbull. It is a delightful tale of innocence, and the power of resilience. This year, Greg McGlynn and Nicholas Griggs decided to give our school a taste of the strength of mind of Matilda.

Matilda, played by Lily Parker, is a young girl with a very strong spirit, and a love for reading. She’s very smart, and advanced over her classmates even on her first day at school. Matilda quickly makes friends with Lavender, Kaliah Tice, and her other classmates. From the beginning, Matilda is plagued with the dislike of her parents, Mrs. Wormwood, Madison Spiers, and Mr. Wormwood, Zachary Wash, as well as her headmistress at school, Miss Agatha Trunchbull, played by Christopher Malaby.

As a first timer in the Musical Theater world, the cast, crew, and directors have given me a new appreciation for Musical Theater. I got chills when the cast would all sing together, laughed when Mr Wormwood got a new hairstyle, and overall enjoyed the entire performance immensely.

I was glad to have had the opportunity to witness such a fabulous performance, and hope everyone is as well.

Now, this show would not have been complete without the Orchestra and the technical crew. With Nicholas Griggs leading the Orchestra, Henry Weiner, Joel Montes, Jackson Schrader, Sydney Myers, Amy Warner, kaytlynn Kuder, Hayden Schneider, Mason Anguiano, and Meghan Monroe created an amazing musical atmosphere and set the scene for each and every song. With Kayla Sides as the Choreographer and Greg McGlynn as the State and Tech Director, Tyler Jones, Alora Carr, Macy Gorsuch, Raiden Chick, and Hannah Erickson made the sound and lighting a beautifully executed dream.

While lighting, sound, music, and choreography make a musical amazing, it would be nothing without the amazing sets, created by JC Becker, Xavier Billings, Jillian Bruner, Dakota Brown, Mara Engel. Elissa Evans, Madi French, Macy Gorsuch, Tyler Jones, Tucker Pelnar, Collin Reiman, Kiya Richert, Breanna Schnelle, Lane Thompson, Collin Winter, Ethan Whitaker, and Elijah Witt. The beautiful sets were sturdy, beautiful, and made you feel like the characters were really in a scene, instead of on a stage. To anyone who hasn’t seen it, I recommend it to all if you have the chance.

Another showing is on Saturday, February 22nd, at 7:30pm.