Climate Change – Is it Too Late For Our Polar Bears? 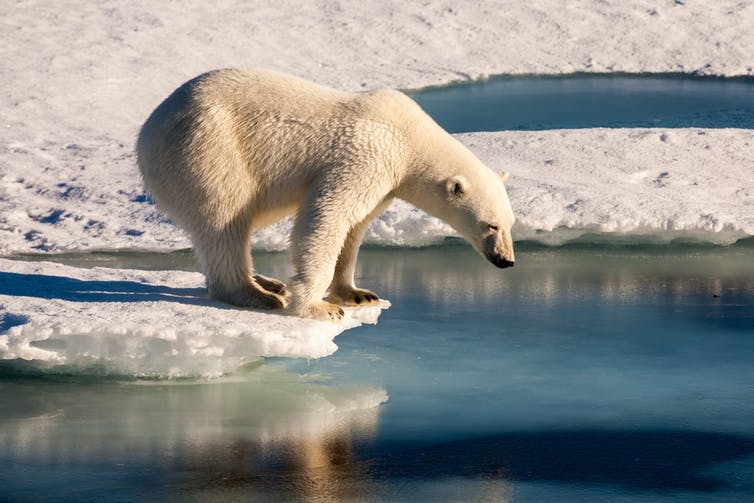 The issue of climate change is ongoing, what can we do to help save the bears?

Although climate change is creating serious consequences throughout our planet, the most serious consequences are being experienced around the Earth’s poles. The Arctic has endured the most damaging consequences of climate change due to both the disappearance of the sea ice and the increased length of time that the sea takes to refreeze each year. How much longer will the polar bears, as well as the other animals in the Arctic, be able to withstand these conditions before they reach their breaking point?

The seas surrounding the Arctic are frozen for a majority of the year and do not begin to melt until the sun rises. This transformation occurs every summer, and does have many positive benefits, as it brings with it great masses of wildlife who come to the Arctic to feed and breed. However, these changes also come with many disadvantages like the rise in sea temperature, the thickness of the sea ice, and the increasing amount of time that it takes each year for the sea to refreeze. These changes are causing a negative impact on many animals, but in the Arctic, these changes threaten to wipe out the very existence of the polar bear.

The largest land carnivore, the polar bear, is a species that relies almost entirely on the sea ice. A polar bear’s diet consists mostly of seals, and it needs the sea ice in order to locate and reach these seals. During the summer months, when the water is melting and breaking into smaller and smaller pieces of ice, a seal is easily able to escape any approaching polar bear. Once the sea has completely melted, the polar bears are then forced to wait the remaining summer and autumn months out on land, living off the minimal fat reserves they have left. Because of climate change, the polar bears are having to endure longer summers each year. The polar bears are already being pushed to the brink of starvation. Who knows how much longer they will be able to survive in future summers while they wait for the sea to refreeze.

We must work together to make sure the ice doesn’t melt. If the ice disappears so will our polar bears. As we leave school for summer break, the conditions are starting to worsen for the polar bears and other species. Things such as riding a bike instead of a car to reduce CO2, using less heat and air conditioning, and even informing others on the issue of climate change could make a big difference this summer. Some little changes can be made that will make a big difference in our world today.