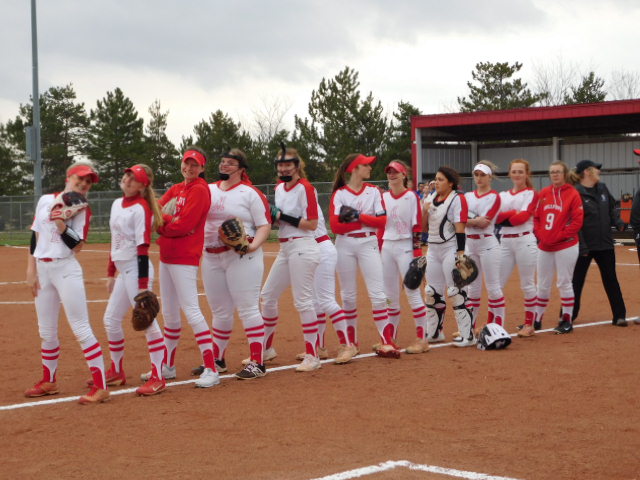 McPherson Bullpups in line for the National Anthem

McPherson High School Varsity softball team lost a double header Thursday, March 28 at the Grant Complex against Winfield. Sadly Junior Varsity got canceled due to injuries and lack of participants.

McPherson was going hard in the bottom of the second inning when Ariana Potter hit two-run homes to give the Bullpups a 2-0 lead. In the bottom of the 5th inning the Bullpups fought hard and tied the game 4-4. Ashlon Stanford sophomore at McPherson high school said “I play mostly right field and this will be my 9th year playing softball. We will work on driving our hands to ball and making sure we make contact and making sure we see ball into glove. We battled hard at our game and came back but Winfield just pulled it out and beat us.” Winfield was ahead in the 7th inning 7-4 and won the game.

In the second game Winfield was up 8-1 and McPherson battled and caught up but not quite enough to beat the Vikings. For four innings Winfield and McPherson held the same score until the Bullpups got seven runs and was one point away from being tied with the Vikings.The pitcher Addie Fitzmorris has been playing for 13 years and now she is a senior. Addie said, “I think it went pretty well. Hitting could have been a little better but overall I think we did pretty good as a team. I think we all need to rest because we have had four games this week and that is a lot. We are definitely going go work on what to do in the outfield and how to charge the ball.”  The ending score was 11-8. Both of the teams fought hard but Winfield beat McPherson by two points.

McPherson’s next game is Tuesday, April 2 in Salina. They play two teams, Salina and Topeka. Come support the Junior Varsity and Varsity Bullpups.